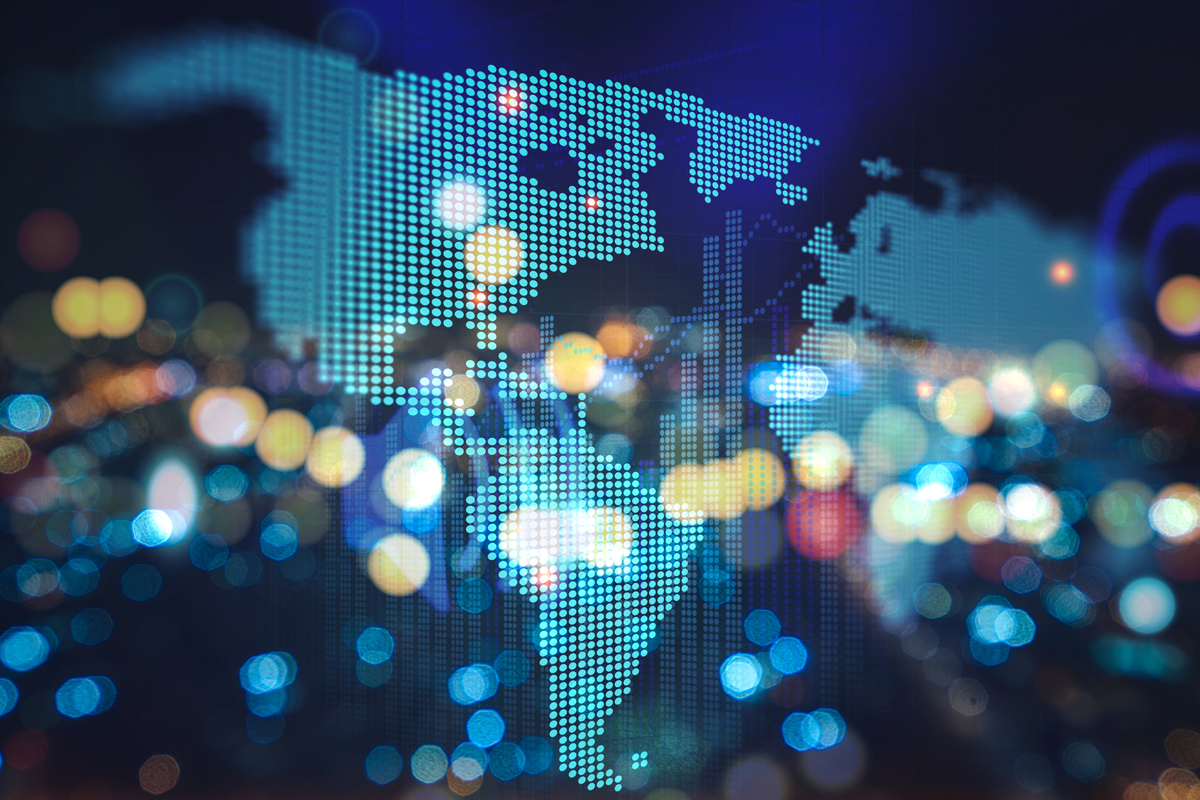 Small caps, particularly small-cap value, which is an asset class we’ve continued adding to, continued their upward momentum during the first quarter of 2021. Both monetary and fiscal stimulus packages helped fuel a rally in early cyclical sectors, which kept the growth-to-value rotation in motion. During the quarter, domestic markets (which we overweighed) outpaced international markets (which we underweighted), as manufacturing activity in the U.S. bounced back strongly.

The yield on 10-year Treasuries spiked as concerns of loose policy potentially overheating the economy weighed on bond investors. Rising rates dragged down the broader Bloomberg Barclays U.S. Aggregate Bond Index during the quarter, as exposure to duration (or sensitivity to changes in interest rates) detracted from bond returns. On the other hand, the contraction in high-yield spreads helped buffer the impact from rising interest rates, which benefited high yield (our largest fixed income overweight) and bank loans.

The reflation trade likely will continue to drive markets higher, as the wellspring of stimulus helps absorb most of the remaining pandemic-related economic headwinds. While bipartisanship is a rare sight in Washington, the Democrats’ unified government should allow them to use the budget reconciliation process to pass further stimulus measures, provided they don’t have infighting within the party between progressive and moderate factions. One of those few areas where there seems to be bipartisan agreement is that China has become a formidable competitor that seeks to become the next global leader and influencer. How Congress decides to address this issue remains unclear, but it likely will continue with the hawkish approach that was started by the Trump administration.

Since the pandemic broke out, the U.S. government injected more than $10 trillion in monetary and fiscal support into the economy. This amount of money equates to roughly half the annual gross domestic product (GDP) of the U.S. economy.

The Biden administration’s next stimulus plan, focusing on infrastructure, targets various industries that range from technology-related sectors to construction. In general, the goal seems to address both supply-chain bottlenecks and areas of growth. This includes everything from improving highways to installing 5G networks, which is fifth-generation cellular technology. Furthermore, research-and-development incentives likely will boost semiconductor manufacturers, which will seed the next technological progress.

The ongoing trade dispute between China and Western nations has forced manufacturers to diversify their supply chains. Countries such as Vietnam and other Southeast Asian nations are likely to benefit from this supply-chain shift.

Additionally, the U.S. likely will look to boost domestic activity by improving its own domestic-supply chains.

In the U.S., manufacturing activity experienced a strong rebound from its sharp deterioration last year, as indicated by the Purchasing Managers Index (PMI) for March coming in at 64.7, the highest level since 1983. (PMI levels above 50 indicate expansionary conditions.) 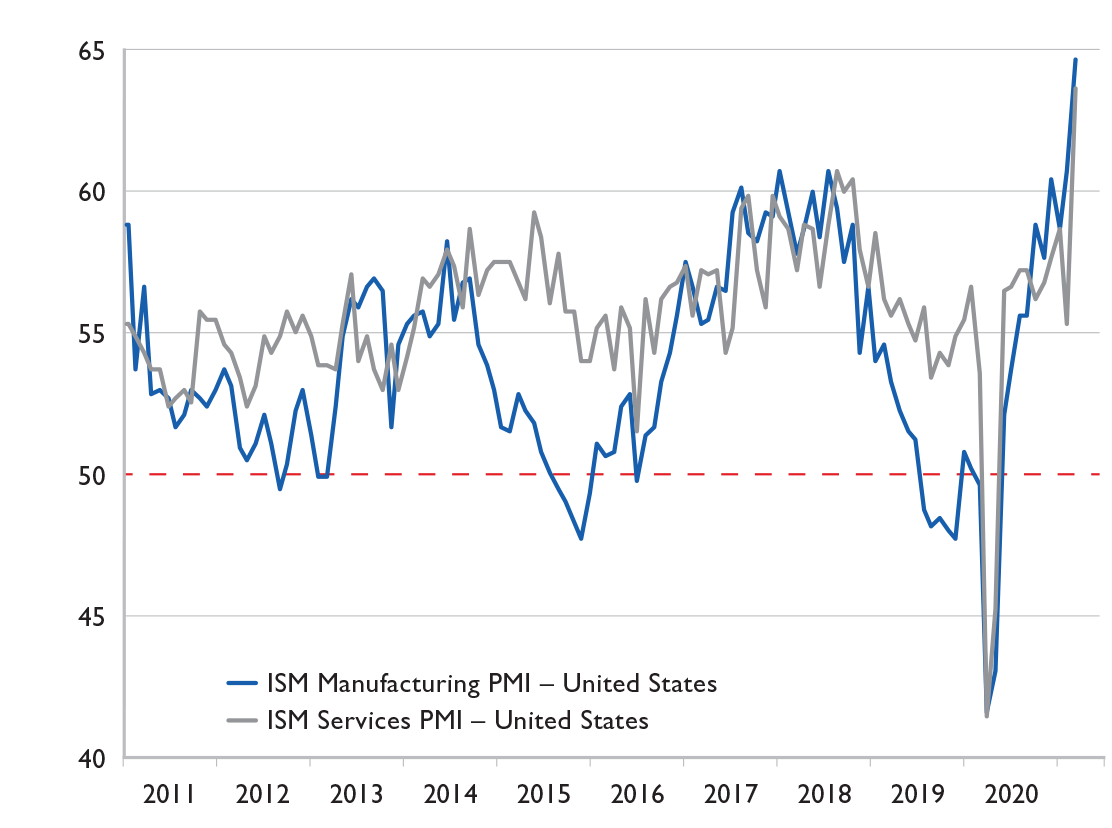 This elevated manufacturing activity also means more manufacturing jobs for those seeking work, which is crucial given that there is still significant slack in the labor market. Manufacturing positions are in higher demand than they have been in decades. 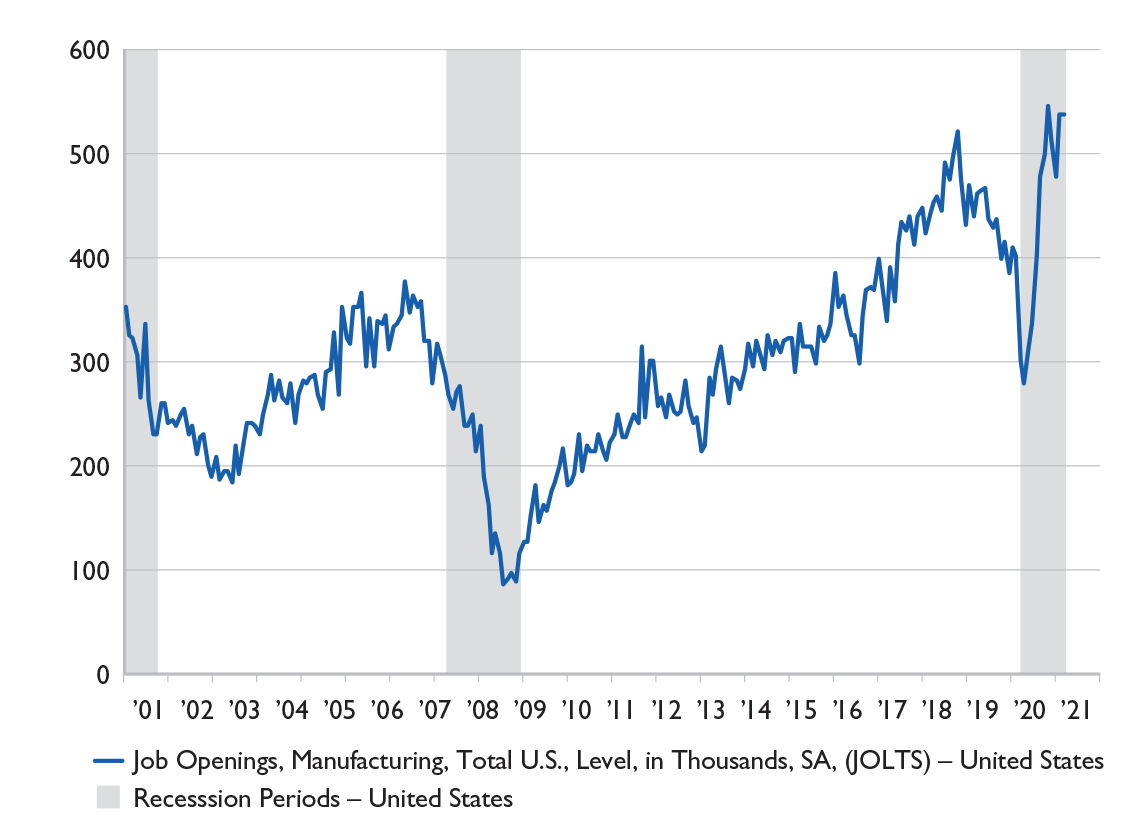 Building out supply-chain capacity is both a domestic and an international initiative that should support global growth and thus be broadly positive for risk assets such as equities and credit.

The Biden administration’s massive $2.25 trillion infrastructure push joins a broader global effort to improve supply-chain networks, as competition for international influence has only raised tensions with China. President Biden laid out his “Build Back Better” plan to improve roads and bridges as well as upgrade the digital- and technology-related infrastructure during the next several years. By some estimates, the process to get the plan approved may take up to six months, and its implementation could bump GDP growth by 0.5%.

The major challenge of the infrastructure bill will be determining how to finance the initiatives. The Biden administration seeks to raise corporate taxes from 21% to 28% and also may need to resort to deficit financing. Any effort to hike taxes will draw opposition from Republicans and even moderate Democrats during the negotiations, which may bring the corporate tax increase closer to 25%. Nonetheless, infrastructure spending, especially because it will help the U.S. compete with China, should receive support from Congress.

Commodities vs. the U.S. Dollar

This global competition for influence likely will support international growth and demand for commodities. Historically, commodity prices have moved inversely with the U.S. dollar. Therefore, rising commodity prices could add downward pressure on the dollar. 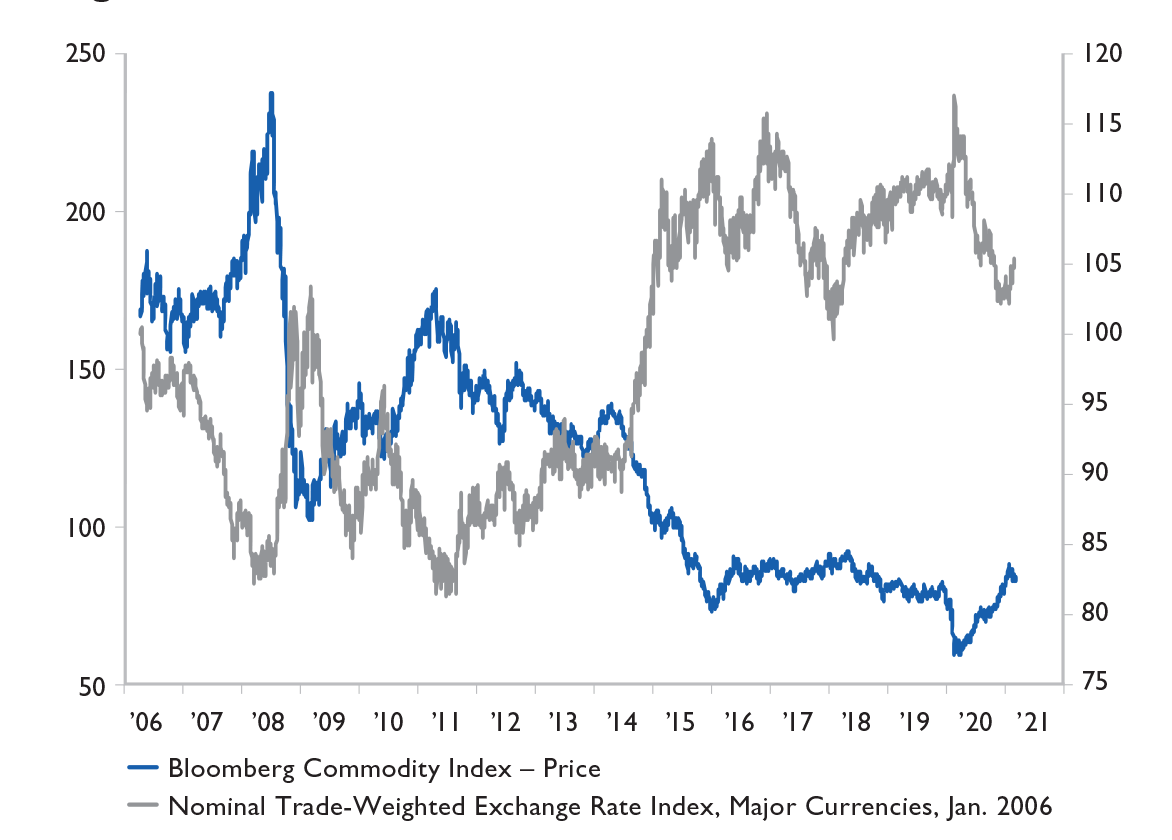 Much of this demand for commodities will come from China as it pushes for more self-reliance. Chinese demand for oil has been positive since the second quarter of 2020 and surged during the first quarter of 2021, while demand in the U.S. and eurozone may have finally bottomed out. 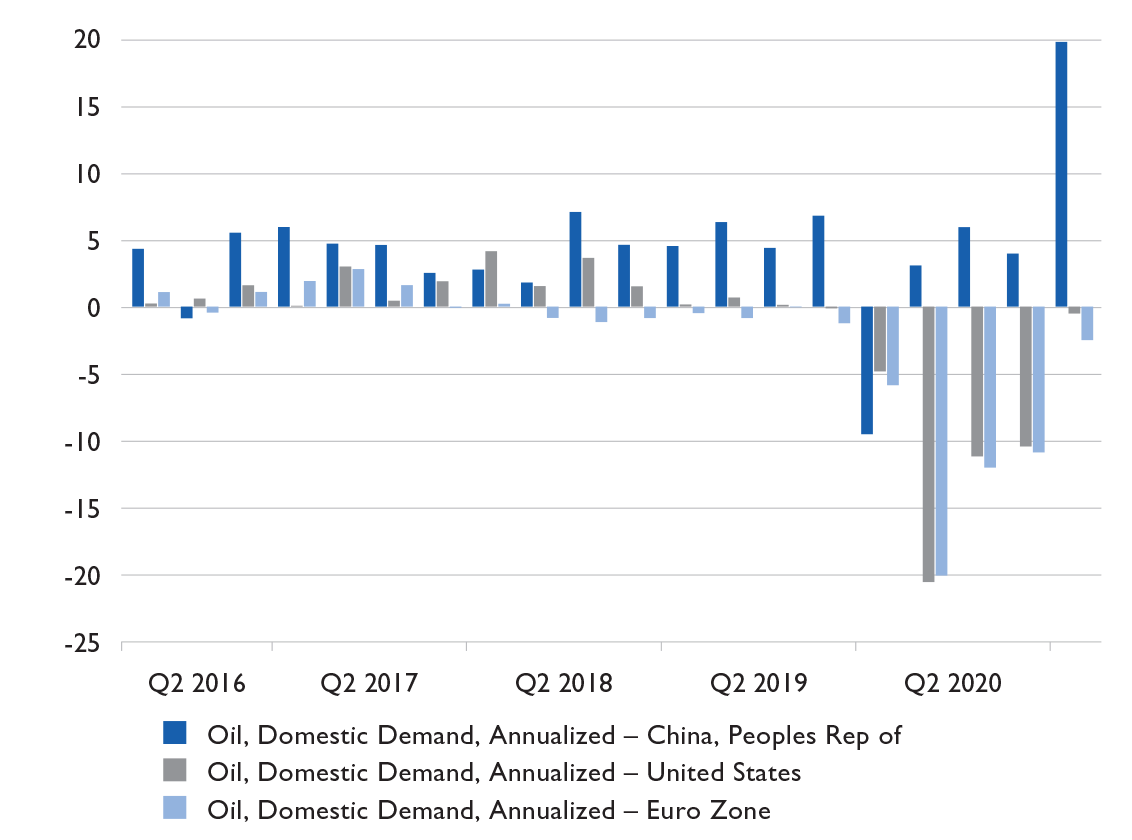 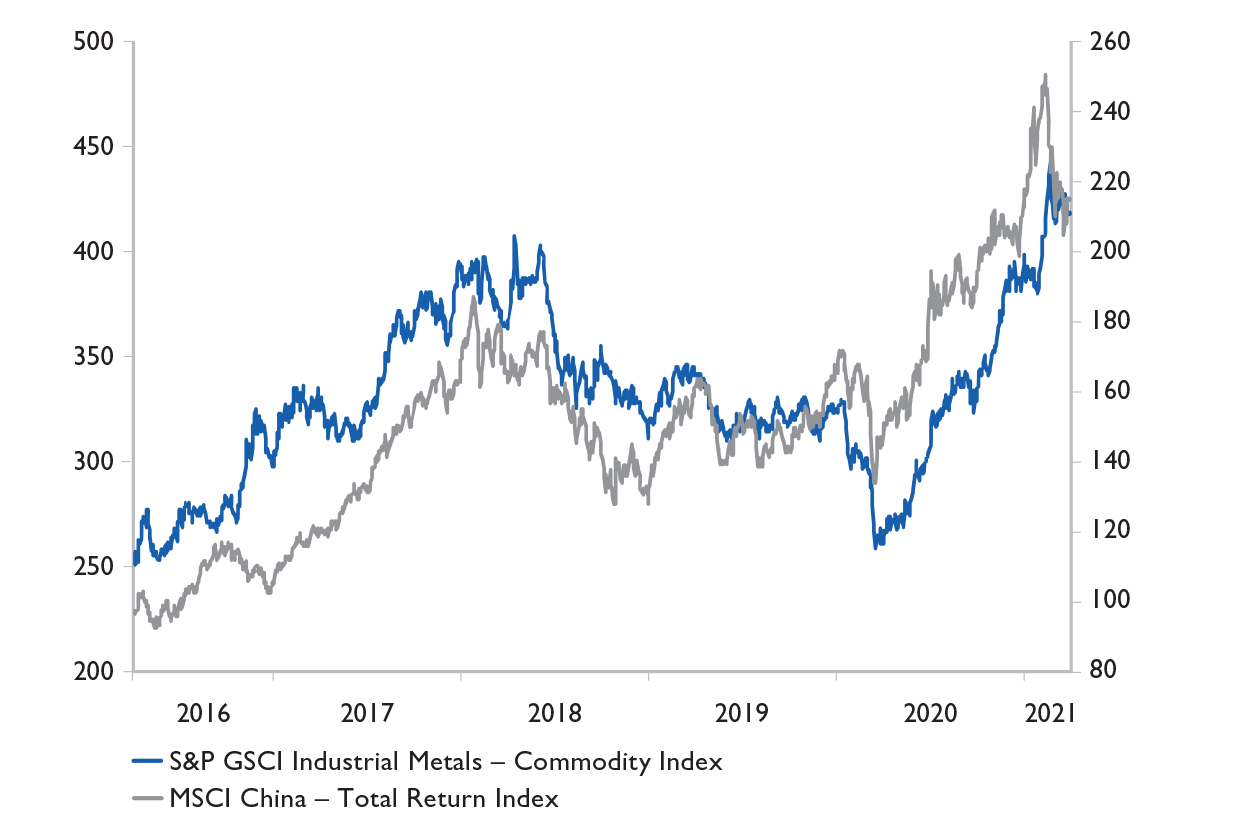 The Asian region represents approximately 80% of the MSCI Emerging Markets Index. Therefore, the early recovery in China should have positive economic spillover effects throughout the region. We can already see China’s consumer confidence has recovered relatively quickly since the pandemic broke out. 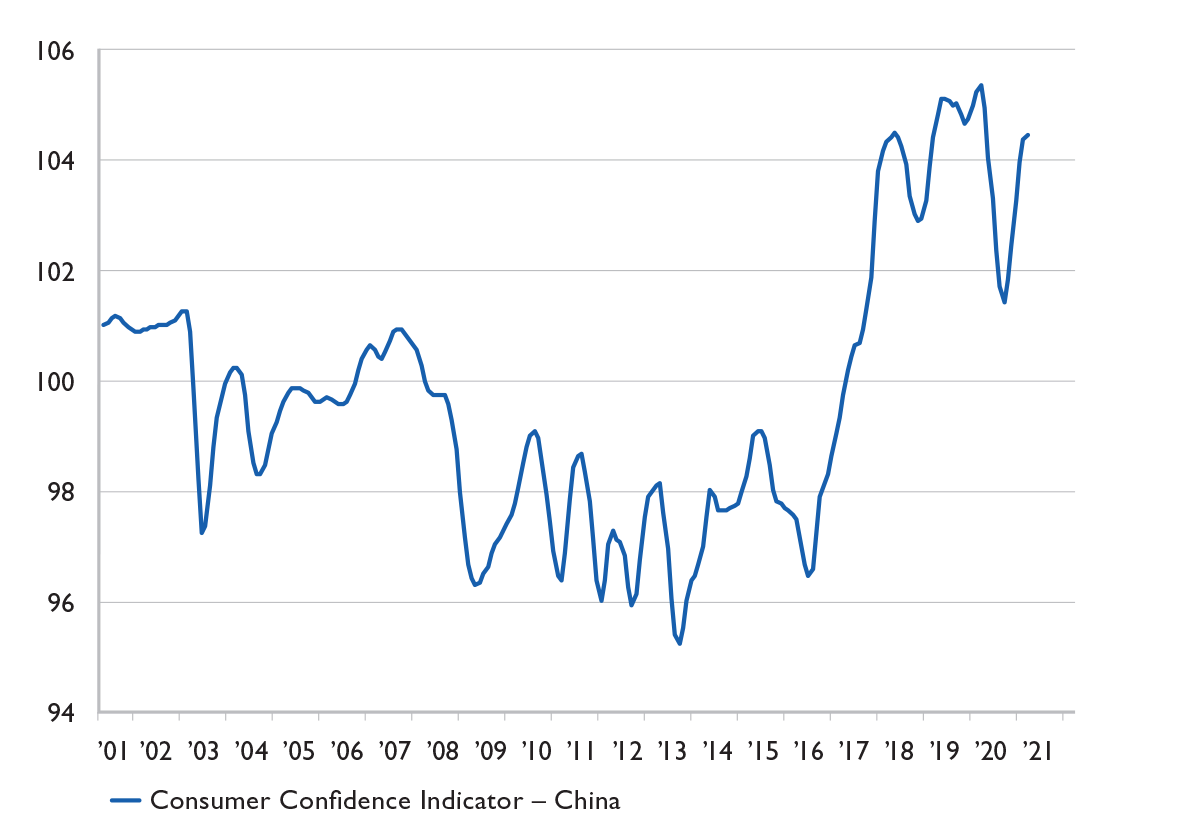 The recovery in China also is consistent with accelerating wage growth in the country. 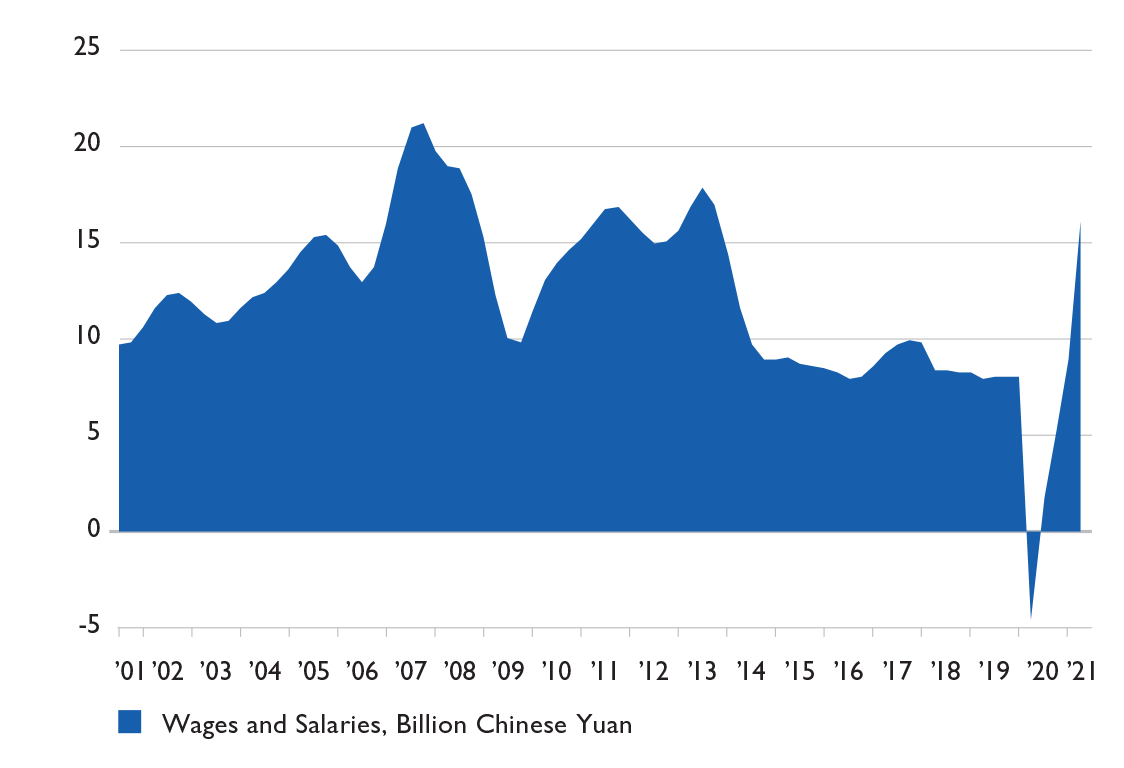 While rising wages in China are consistent with consumer confidence, labor cost pressures in China are further persuading foreign companies to seek alternative supply chains to control costs. However, this should serve to further strengthen the markets of other emerging nations.

The economic recovery and increased competition have the potential to drive global trade higher. Disruptions in supply chains, including the recent incident in the Suez Canal 21and the cyberattack on Colonial Pipeline, will only accelerate a global push for making supply chains more efficient and diverse. This is particularly important in order to meet the pent-up demand that has built up since the pandemic, which will likewise be released as the world’s population gets inoculated.

In the meantime, the reshuffling of supply chains may improve domestic economic activity as manufacturers scramble to meet demand. The competition between the U.S. and China for global influence will continue intensifying, but this does not necessarily mean that decades of globalization will reverse. Instead, nations will look to broaden alliances and partnerships in order to compete on a global scale. This may encourage Western companies to seek opportunities in emerging countries such as India, which is expected to be the fastest-growing economy during the next several years.

While challenges around the world, including the pandemic, upended the lives of individuals, companies have generally been able to adapt. Unsettled differences between the U.S. and China regarding trade and other geopolitical issues likely will worsen in the foreseeable future. Furthermore, trade wars and accidents revealed how easily supply chains can be disrupted. This should continue to drive investments in supply chains as global competition continues to increase, which should favor emerging markets.